Thinks of the things that she may write,
Sweet dreams to come into her night.
Emotions are often there in tatters,
Like the glass of a mirror it shatters.
Falling at once upon the floor,
Leaving her staring, wanting more.
Sometimes I will think of the things I deny,
And how to musings, myself I’ll apply.
What a wonderful web we tangle,
When you can see it from every angle.
Not trying ever to deceive,
Is what we strive to achieve.

It’s been happening again, what can only be referred to as a Brain Dump. Every once in a while, my head feels like what happens to a computer, right when there is a blue screen and it begins a crash dump.
Hopefully at this point your disk drive doesn’t fry aswell. On occasions it has, that is NOT a metaphor. It has actually happened. Note to self, I may need some new technology.

Meanwhile, for those who are blissfully unaware, the brain dump wakes you up, but not quite. So you feel that you are sleeping, but you are actually aware of your surroundings.

It starts to dispose of random things in your head, clearing out what may, or may not be rubbish and you are not in control of what it may select. At times, I have found it rather disturbing, since you never know when it is coming your way, how long it may last and sometimes, there will be a real gem in there, which afterwards will be gone forever. You see, you are not awake enough to write it down, or record your thought in any way, it remains totally illogical, a collection of random thoughts which go through your head and upon fully waking you cannot recall most of it.

I noticed previously, that it used to happen most on a Saturday morning, when I did not have to rise early for work, and arrived usually in the early hours after a particularly stressful week. At times, it has given me the freedom from upset, a release from a distressing situation, which up to that point my have been ruling me. Other times, it can be memories from the past, which have returned to haunt or delight. I usually feel refreshed after this happens, but I cannot help but wonder how many people get it. In conversation with a lady who is a counsellor a while ago, she told me it might be my way getting rid of things which I cannot cope with. I rather think that it is a coping mechanism, but it has only manifested in the last couple of years.

Since last week was a prolific time for my writing things, I am hopeful that what spurred me on to write, was not short-lived and so must not allow my fears to conquer me. Tomorrow is another week and with it, brings new thoughts, experiences and excitement.

So, where does it come from? Answers, on a postcard, email, or comment. I’d love to be enlightened. 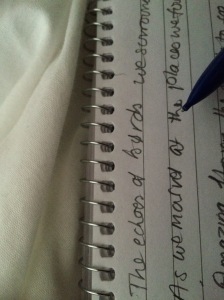 As a fledgling writer I’m consciously aware of the effects of my writing upon those around me, as well as being concerned as to how things are received. The latter being probably what stopped me for so long. Since when I write my poetry it can arrive at the most inopportune moment and I have to get it down on paper, like opening a flood gate, or turning on a tap I do not wish to interrupt the flow, in case I lose it. Of course, I can return to it later to edit it, but , I do tend to write it as soon as it arrives.

I am often found scampering from the shower, drenched in a towel to get to a notepad and write something down, which would look rather odd to the fly on the wall. I probably should keep an etch a sketch in there or something, which doesn’t get wet when you write on it, I have several crinkly notebooks now.

I have pulled over when driving around on my way somewhere, or returning from a particular place or situation and I also tend to use the voice recorder on my phone if I cannot write it down at that moment.

At times this has me sitting up late into the night or waking up in the early hours, with the light on, writing on a shorthand notebook which I keep by the bed. Of course this can easily disturb others within the home. Last night it was the dog and I did not want to disturb him since yesterday he had been unwell, he huffs around and blows my concentration and is restless for the remainder of the night and grouchy the next day.

So, last night this resulted in my writing in the dark as things came to me in the early hours of this morning. I am getting used to the effects upon my sleep pattern of writing and thankfully am able to rest after I‘ve got it all out of my system, but at times, that has taken hours and I find myself giving up on sleep and tired the next day. As a very small child I used to read in the dark if I couldn‘t sleep after lights out, with a teddy bear under the covers, I used to save my pocket money to buy small torches which could not be seen. I remember being out with Mum once and she asked why I wanted a torch, I told her it was “for kissing bears under the covers.”

But until last night I had forgotten how exhilarating writing in the dark can be, of course your handwriting is different to in your waking hours, you might be half asleep, dragged from your slumber by random words, or phrases. It flows all over the page words sometimes running into each other and will not follow the lines, wiggling uncontrollably. Sometimes, you will even misspell the words as you write them, if awoken you might not recall where in the word you had got to. In the morning, upon review you will see that your writing differs greatly, you are trying to space the lines more carefully so that they don’t run into each other, and you can’t actually see what is on the page. But, I found that my senses were heightened and my thoughts clearer, a host of words which I have not tended to use before, came to me and appeared on the pages.

Last night my thoughts were racing, three separate subjects came to me and would not leave. So I have the basis at least for a few new pieces, plus a brainstorming word page.

So if you haven’t already tried this and are looking for inspiration, do not put it to the back of your mind when it strikes, I recommend that you Seize the Day, or moment actually!