25/6/17 After a week of feeling exhausted with high levels of pain and very little sleep I was met with an inspired moment. So this weekend’s sudden burst of creativity has come about by this….

A small pot of local flowers from my garden which either looked pretty or smelled nice. I thought I might be able to make some pot pourri to send to my friend in Australia as part of her birthday gift and to remind her of home. I miss her even more since she emigrated. Yes I have lots of wild flowers which have grown in the wrong place (otherwise known as weeds) but they are blooming and some of them smell rather lovely too so I’m not afraid to include them.

Unfortunately I then looked it up and found out that you cannot send plant matter to Australia since they have strict laws. So I thought about making her a wildflower bouquet mixed up with the ones from my garden and photographing it for her. Perhaps I would make it onto a notebook so she can write a journal, or get it printed for her and put in a frame. Who knows but on our evening walk we collected more and since it was a rainstorm by the time we arrived home I had to store them in the fridge overnight and so this was made today. 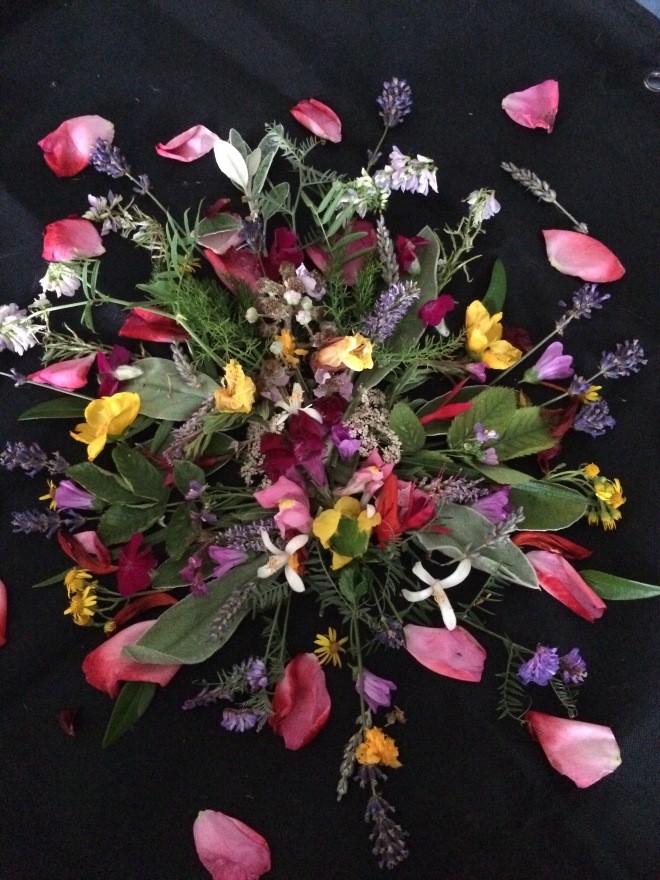 It adorned my dining table for the day as I wasn’t sure exactly what to do with it next. Send it with blessings to the wind, or make the pot pourri out of it, it does smell rather nice. In the end I have opted for both.

I was inspired by an artist named Day Schildkret who on his walks collects things and makes beautiful sculptural earth alters from his foraged finds which he photographs. Known as Impermanent Earth Art You can see his work at http://www.morningalters.com I love his work and am perfectly happy when doing my own foraging for beautiful things.

But it somehow set the ball rolling. Last night I wrote up my poems to the pc from the notebooks of my last trip it boosted my morale again finding out that I have almost reached my quota for my second book selection (a further 100 poems) and it seemed to trigger the writing again, suddenly whizzing around my head. This morning I wrote a poem about my friend who has invited me to her wedding next week. I plan to give it to her for a gift and thought that I need to do something else for them too. I am all for a bit of upcycled giftware and have made her a recycled roof slate chalkboard with the wedding couples initials in a logo and the date of their union. The slates were reclaimed from Scotland. I have a few of them I intended to make up for some friends and family or perhaps sell at a later date.

I also made one for our home which is personal to us. This has become our catchphrase of late since wherever we are as long as we are together it’s home. 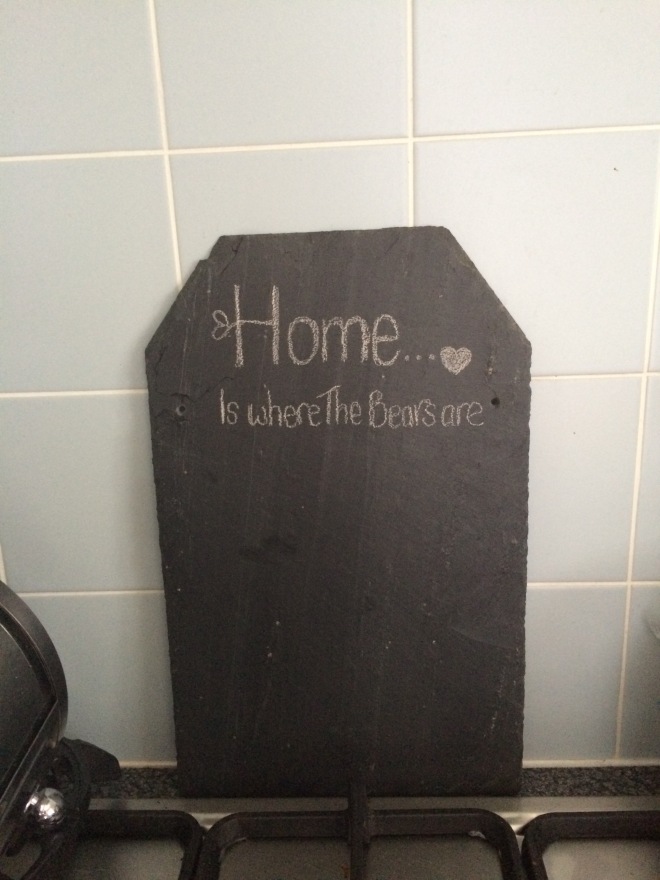 It seems that I have been able to write more poetry this week. Not all of it suited to a book, or here but had to be written nevertheless.

They couldn’t get between us.
Through thick and thin we’ve stayed,
Don’t always make a fuss
We saw it when they’ve played.
When things are sent to try us,
And be sure they often will.
Just know that I am by your side,
However you may feel.
Sometimes things are too much,
they try to get us down.
But I know there’s a smile,
Which hides behind each frown.

I knew it I just knew it.
That for once I had been right.
That decision had been made
We didn’t need to fight.
Agreeing both together,
In fact wholeheartedly.
That in the finest weather,
We could see the sea.
We stopped up here in awe
To admire the view
Found a space on the floor
A vantage point, so new.

The place was old and tatty,
Somehow the worse for wear.
They thought we had gone batty,
When we hoped we’d settle here.
As time marches onward,
Seven years have almost passed.
The trials we have shouldered
Certainly aren’t meant to last.

It wasn’t to be easy,
That we always knew,
But helpfulness was shown us,
By the brave and by the few.
Some thought we’d back down,
So that they could see us off
But we’re not foolish or a clown,
They didn’t think we’d be tough.

It seems as we say often,
“Life shouldn’t be this hard”,
Lets hope that it will soften
And our fortress we will guard.
We’re adamant that we,
Will just stay here around.
Holding on to what we have
And standing firm our ground.

No, I’m not ready to jump or anything.  Although things have been pretty stressful lately,  (for that read at times unbearable) at times you feel as though you are reaching breaking point, when you are laying down to sleep and the dreams you have are past experiences, mixed with anxious feelings for an unknown future, it seems that all the fears and bad experiences are rising to the top again, the forefront of my mind and I hate it. Upon waking I know it is a dream but I do not want it to be the reality and I really don’t want to relive those aspects of my past all over again. On some such occasions, I tell my Mum, she agreed it was pretty horrible, but that I should acknowledge it as bad dreams and don’t accept it.

My future is not hanging in the balance, but despite my best attempts to leave my fate in the hands of the gods, or some higher power.  I find myself crying out on a far too regular basis that “Life shouldn’t be this hard!” feeling as though I am some forlorn child who is unable to cope with her life.  But it is not only I who feel this way, my partner also is struggling with why things are so difficult for us all of the time.  Some people in the past have suggested that we might be better going our own separate ways, that somehow we are bringing each other down.  But that is unkind, (the politest response that I can put here and a pretty messed up way of looking at things)  Anyhow, I can remember without rose tinted glasses that life wasn’t so fabulous before he came along either.

When one thing goes our way and we are overjoyed after, days, weeks, months of things going wrong.  Other people do not have to deal with things like this on an every day basis.  We really need a break and we are crying out for one.

If the angels are listening, please send some good our way, health, happiness, funds, or anything really to lighten the load.

(written the other week) A few hours ago my partner went out in the truck to get it looked at. It struggled to start. Conked out again and then he tumbled off down the hill in it. I thought that whilst he was out to keep my mind occupied I would do something useful.I put away slot of things and did the daily chores. Tidied up and put things away again. Everything gets dusty in this house, the slightest movement brings down dust and debris so it is an ongoing mission to keep things clean.
After the chores I got the chainsaw out since we always need wood and we had carried a lot of it down to where we cut it up. So I thought that I would make a dent in the pile.

I have been cutting for an hour and a half. It’s a small chainsaw so is limited as to its use, however I can manage it. I cut and cut, the dog safely indoors out of the way.

I hauled the branches and logs from behind the shed doors where we had been storing them out of the rain. After an hour or so, I thought I’ll just do a little bit more.

The pile I had cut growing rapidly. I hauled a branch out which was bring stubborn as I am and did the first somersault that I can ever remember. Straight over my log pile, I rolled on a few of them on the way down and winded myself, laughing at the silliness of it. I must have looked ridiculous. After thinking that was lucky that I didn’t hit my head. I’m sure the hard hat that I was wearing was a good idea.

Shaking myself off, I cut the last few branches.

I have now hauled them into the woodshed and stacked them neatly in a new pile. We work our way through each one but these may take a little while to air.

Well. At least I have a different reason for the painkillers tonight. Somehow it feels as though I have earned them instead of taking them for annoying pain which doesn’t go away instead.

It may not look much to those of you who are used to this kind of work on a regular basis. But at least I have made some preparations and in time with more hours spent doing the same (without the tumble) it will mean that he doesn’t have to. I will sleep well tonight knowing that I have not sat on my backside wondering what to do next.

I feel a small accomplishment of my own today.

And I know that the muscles ached the next day. Craving a bath when there was not one available.

As they dance around and round

casting their shadows upon the night.

Not worrying what’s wrong, or right.

Moving round they twist and turn,

Forged among the great and good

As faces shine with wonderment

We warm the room before our bed

To rest a while the weary head.