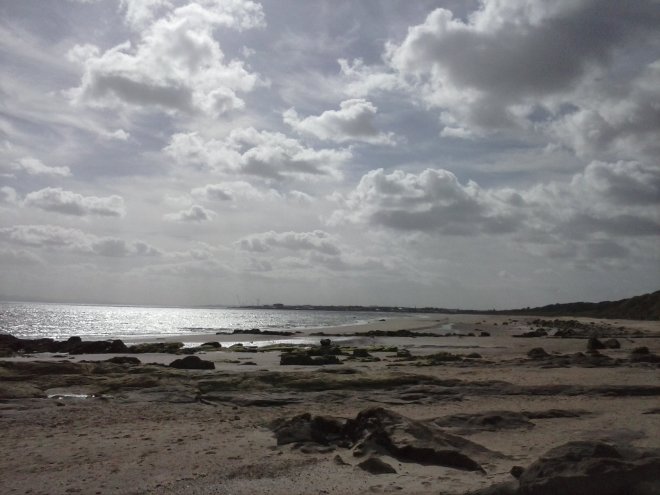 This Beach, The One
The first real one that you ever visited.
With it’s sandy spot, where you took off your shoes and pushed your feet into the cool sand.
Where you carefully navigated the section with the smooth pebbles trying not to find a crab or jellyfish.
The swimming pools, where you paddled with friends.
The beautiful views, never ending water, reaching for miles.
The boats bobbing and swaying on the tide.
The mud flats when the tide had gone out,
One of many children searching for crabs.
Beachcombing, to see what can be found.
Kiosks selling ice creams, or chips and the smell wafting along the promenade.
Friendly dogs running up to say Hello and share a picnic.
Sandcastles and random artwork, left for someone else to find.
Listening to the waves, crashing against the breakers.
The trains rumbling past, shattering the peace and quiet.
The seagulls swooping and squawking investigating the remnants of the day.
This Beach,
The one you used to play on when you were ten years old and had just moved close to.
The one you were baptised right out in the open air in the swimming pool, followed by a Barbeque with all your friends from church. A celebration of your life given to God.
The one you used to walk to as a teenager, when you needed to think when you thought you were broken hearted.
The one you bunked off from school to walk to, since it was just far enough away for you not to be found.
The one where you watched the windsurfers and the beach bums and toasted your skin for hours, working on your tan.
The one where you sat and sobbed, when it was all too much for you.
The one where you yelled at the top of your voice, when you felt that things were unjust.
The one where you met your boyfriends, years apart.
The one where you had parties on the beach, listening to your favourite tunes.
The one where you used to meet your friends.
The one where you used to sit on the wall to look at the boys.
The one where you walked your dogs,
The one where you met your current love.
The one where you walked hand in hand with him.

This Beach,
Is also the one where he used to go to think. His favourite beach, where he had sat in the same places, done some of the same things and for years and you had just missed each other. The one where on that day, years later the time was right and walking back from the beach, you met, talked for hours, arranged to meet again and began to fall in love and your story began.