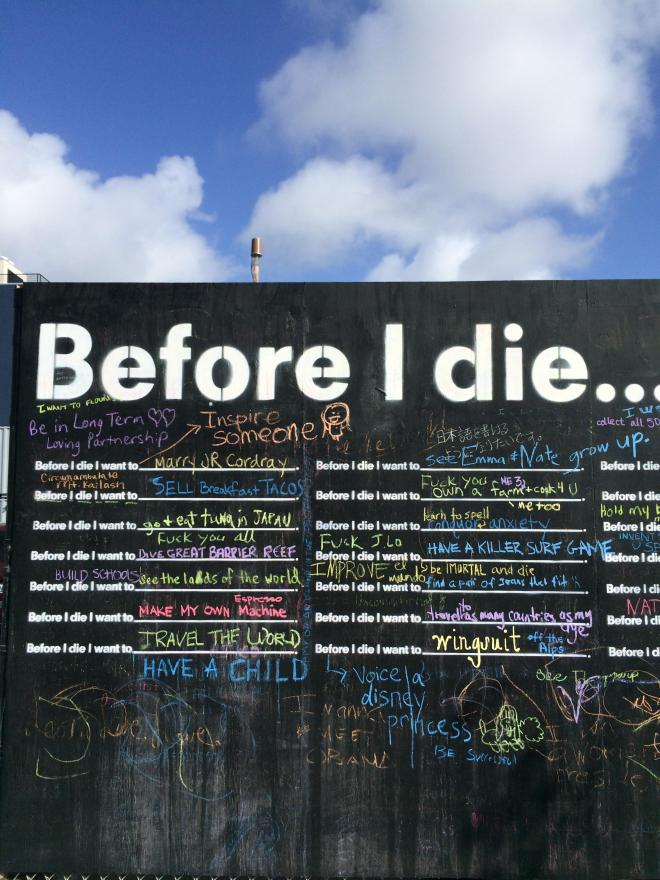 The Bucket List is a wonderful film starring Morgan Freeman & Jack Nicholson it is one of our all time favourite films and was on TV recently we watched it again. Clearly inspired my partner has been dreaming again of things that he would like to do too. I hope that he gets to do them.

So as I try to think of the ways that I will actually begin to tick things off my bucket list. My partner is thinking of ways that he can make it happen for me.

What is a little bit bizarre is that although things get mentioned from time to time. It is not written down anywhere. So he is going from memory which at times can be a bit sketchy. But it seems that he is quietly planning my bucket list for me. Making it happen. Like the trip I mentioned where I find as many Art Deco and art nouveau buildings and photograph them. Well, I as anyone reading this regularly will know I am just back from Barcelona a last month. Within a week he was already pointing out a hotel break, 2 days in Venice in a beautiful 4 star Art Nouveau hotel. Would I love to go? Yes of course I would. What worries me is that he has no intention of coming with me since travelling by air is an issue. It has been for some years, but now he is concerned about his respiratory system since he has been so ill lately. But he wants to send me. He told me at New Year that I would have to get used to travelling on my own. I wasn’t sure what he meant, but I guess this was why which is so much better than the alternative since I can comeback and tell him all about it and drive him crazy looking at the photographs and now write about it too.

Of course I wouldn’t have to travel alone if a friend or family member wanted to join me, so that’s always an option. I don’t know how I’d be abroad totally on my own. I think I need a bit more confidence before I take that step. But there’s hope for me as I’m only uncertain not terrified at the thought of it. Time would be my own and I wouldn’t have to do a particular thing. There again though it wasn’t like that when Mum and I travelled, it was very relaxed. We did not have an itinerary just expressed a wish of things to see and she noticed things that I did not when we were out and about. A beautiful doorway here and there, or architectural detail. Something on the bus which I made her get off to show me so I could capture it.

We did say that it would be interesting to see how many of our photographs were of the same things since we shared a keen eye for so many of the sights.

I don’t claim to be an expert on anything, merely an enthusiast but I would love to make a living doing this.

Yes, I am an enthusiast of so many things.

So along with my growing list of things that I’d like to do this year. I’m afraid my bucket list is growing too and I don’t think that’s a bad thing really. It simply means that I have not had enough of the experiences of this world. There is more and more that I wish to see and do before I die and if I don’t get to do it all soon, then I’ll just have to live a long and happy one. I don’t know how long it will take me to get to Australia but I will get there one day and collect hugs from my extended adopted family when I do.

It is strange that this post has remained in my “Draft” folder for over a year untouched and incomplete but what is even stranger, for me at least is that I have just ticked another thing off my Bucket List. It was a big one of the things which I had no clue as to when it might happen, my only hope was that it would. As you will have seen from my posts recently, I got to hug my extended adopted family in Australia sooner than I thought and I travelled there alone. (Does that count as two things, I wonder?)

Of course this has not quenched my thirst for new experiences at all. If anything I am relishing the thought of what will come next. Its turning out to be an exciting journey after all.  Now how IS that ever increasing Bucket List coming along?

I have often wondered what it would be like to travel the globe and see wonderful things, beings and cultures en route, however I have always held back.

When I was younger it was purely from a financial aspect, I couldn’t afford it.  But as we grow, there is more of the world that sometimes we want to see.

I have travelled a little bit, mostly around Europe since meeting my partner, prior to that I had one disastrous holiday in Tenerife, which was supposed to be “a no strings attached vacation with a friend”  Needless to say, that was not the case and I came home after a colossal row having felt pressured which rather spoiled the experience.

Since then, we have visited several regions within France, Belgium, Tunisia, Hong Kong, Poland and Copenhagen and of course Wales and Scotland. I know to some who are used to travelling it is a mere drop in the ocean, but to me it opened up the world of possibilities and inspiration.

Last week, I was visiting Spain, another on my wishlist of places on my bucket list which I am slowly ticking off as the years go by.  (Yes I do have them)

I had thought that I would post from the sun whilst I was there, but was too busy taking photographs and enjoying the experience to write about it. But as my head is now filled with new memories and things this and more are being posted upon my return.