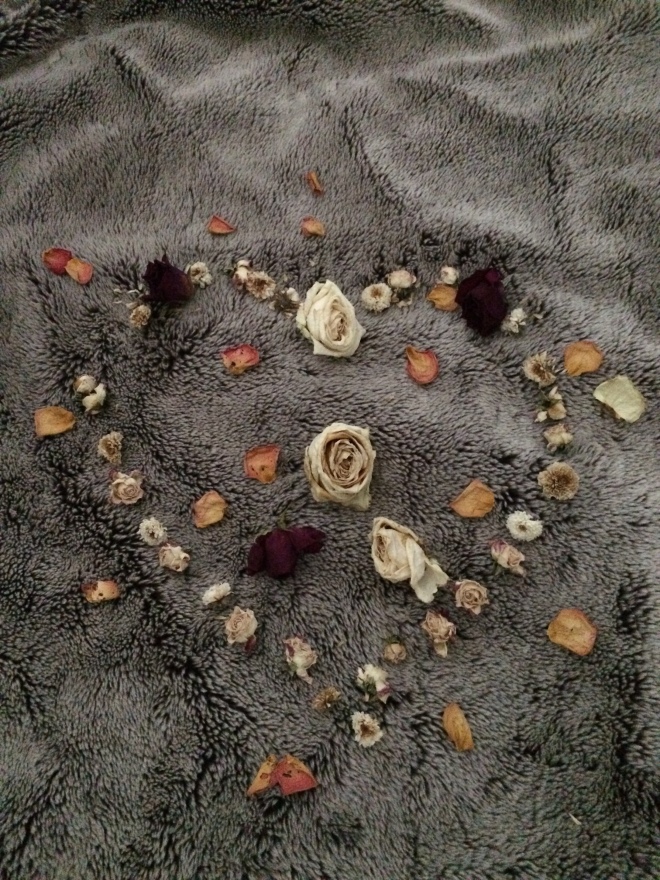 I can’t pinpoint exactly when it was that I thought again about Reiki and Chakras and focusing on getting better in whatever way I could but it’s pretty recently.

After a while of being unwell you start to look at any options which might be open to you, I guess that you become more open to the options too and try to simplify your routine accordingly. But it seems to have coincided with the shift in my life that I was also welcoming and appears to have begun.

Things are on the up. I feel it and have a really positive and upbeat mentality for the first time in a while. Brushing aside my somewhat cynical thoughts of what might be and throwing caution to the wind, well not exactly as I don’t want to bring out the self destruct button. But in a controlled way I am considering new things and making more plans.

I am going to have a holiday, which always brightens me up although the thought of leaving my loved ones back here also kind of fills me with trepidation. I am not a seasoned traveller. I always wanted to travel when I was younger, you know travel safely to far flung places and see the world but never got off the ground. My inbuilt craving to be loved saw me spending my time instead with unsuitable and and often manipulative boyfriends after an early relationship ended. I also needed to support myself so didn’t escape it all as it wasn’t financially possible. It is only since I am lucky enough to have a partner who wants me to travel the world and embrace new things who sends me off on little journeys from time to time that I have been able to do so.

There is something wonderful about him that makes him say. Haven’t you always wanted to go to that place? You should, we’ll do it. Wanting me to see some of the wonderful places he has been to for myself, camera and notebook at the ready. He knows that I will be enriched by the experience. He always knows just the right time that my body, or soul is needing something and I come back with renewed vigour, excitement and strength and loving him for sending me away. I miss him like crazy when we are apart and worry about him, but yes he is able to cope without me and I get a heroes welcome from him and the dog when I return.

But lately I got to thinking about the benefit of Reiki and the fact that I have had only one session and it made such a massive difference to me. It was about 3 years ago. At the time I also learned to channel that same energy after the session. I read some things and tried to learn more about it and when I was unwell I found that if I meditated and placed my hands upon the chakra points of the body the energy helped to alleviate pain. At the time I was going through a very frustrating situation in my workplace and couldn’t speak up about the problems there as my voice wasn’t being heard by my superiors. I had terrible sore throats for a couple of months. It turned out that my throat chakra was blocked. I have had a problem with lumps in my throat ever since then which have never really gone away. I did get checked out by the hospital but they could not do anything about it. However I often felt that the pain that I had there could be alleviated by the warming energy when I meditated and placed my hand just in front of my throat for about 60 seconds. I did eventually get the opportunity to speak up, but by then a lot of damage had been done both mentally and physically by the toxic environment I had been in.

Recently I thought about that healing energy again and how I craved to become well. I also thought about the crystals that I have in the house and how they can also assist me. A few of my friends have found the benefits of crystal healing and although I haven’t thought that I have used crystals in the past. They have been in my life for longer than I thought. Those odd stones purchased from time to time or found on my travels. A pretty thing that has caught my eye or appeals to the touch, that the hand is drawn to and rests upon. I don’t know all their names. Somehow I have been drawn to the ones that have been laying around in the house and I also did one of those questionnaires recently to see if my chakras were blocked as I just wasn’t getting better. I wanted to know what I could do to improve things.

It turned out that my heart chakra was blocked. I needed to open myself up to more love. But also to look beyond myself for it. To not be limited by ego, to love unconditionally and see the beauty in all things again. It is regulated by the Thymus gland whose purpose is to regulate the immune system. I have had a problem with my immune system for the past few years and have recently been working on strengthening it. The Thymus gland also governs hormone production and bodily functions. I’ve had IBS for many years but I’ve also noticed that I often have physical pain in between my shoulders which travels through to my chest at the front. It cramps and the only way I have found is to soak in a hot bath until it releases. I’ve had six months of pain in my breasts which I recently was told at the hospital was caused by cysts. My doctors have suggested that a lot of pain is often caused by psychological ailments which I’m not happy to accept. It makes me feel as though they think I’m nuts every time they say it. Then I find out that there is yet another physical reason for the pain and they backtrack again.

• Love for oneself and others

• Ability to grieve and reach peace

• Centre of awareness, integration of insights

“When the Heart chakra is blocked you may also feel emotional and withdrawn” it was then I realised that this has been an issue for longer than I thought.

So what do I do now?

To release the blockage it mentioned use of certain essential oils, such as Rose, Geranium, Jasmine, Ylang Ylang and Bergamot. Most of which I had used recently when making gifts at Christmas time. Some of which are contained in a gift from a friend given to me for my Birthday last month.

It suggests wearing rose quartz, the crystal to bring more love into your life. Hmm I thought, I have a necklace sitting around I should clean it up and wear it. It has adorned an ornament for many years in my lounge and I haven’t worn it. Tarnished by misuse it has sat around the lady who sits crossed legged in my lounge, purchased long before I ever thought about yoga and the effects of it upon the body along with some Chinese I-ching coins bought for Luck some 20 years ago. She looked after them all for me. I have taken the necklace and cleaned it occasionally but recently unravelled it, washed it and placed it outside to cleanse it on the last full moon along with the other crystals I could find in the house. I was told to use the crystals I was drawn to in some way, to hold them or wear them. So instead of replacing the delicate chain around her neck, I put it on mine and it has stayed there.

My mum who makes beautiful crystal jewellery often will change some of the beads in a bracelet for me based upon what she feels I need at the time when she makes a repair. Meanwhile

the tarnish has gone from wearing this necklace and showering with it on, it is silver. I have noticed it’s beauty although it looks slightly out of place with the gold that adorns my neck daily I have left it there. The other night my partner noticed it and said “what a beautiful necklace is it New?”

I laughed as I told him I needed to open my heart to more love recently so I thought I would wear it. He gave me one of those funny looks that I get when he knows more than he lets on and goes with the flow.

But I can’t deny that I have felt much better in the couple of weeks since wearing this Stone around my neck. More loved and loving generally. I have become more accepting of my body and the fact that although it doesn’t work in the way that used to, it still carries me around and I need to look after it. Kind of nurturing towards it. Considering it’s needs and where I can change things for the better. More loved and loving towards me.

Things are changing for the better and we are both thinking more positively. Instead of dwelling on our misfortunes I have been giving thanks again for all that is good and focusing on each and every thing that goes our way and positive outcomes. I used to spend a lot of time thinking in this way when things were better in the past, but somehow it kind of disappeared under the fog of the past few years and I couldn’t seem to shake it off. I am returning to conscious thought and how it affects us.

I think I have been able to let go of the grief that has consumed a huge part of me for a couple of years. It turns out that I have been living in grief for such a long time. Grief for me, trauma, for situations and for loved ones and I think that I have finally been able to release myself from it. I will no longer allow it to hold me back.

These small steps all add up to a long walk, but I feel that at last I am heading in the right direction now.