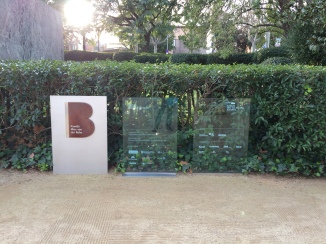 So, how would I feel when it finally happened and was it different to how I expected it to be?

Yes, totally.  I clearly did not know what to expect when I arrived at the place which I had longed to see.  It was my reason for wanting to visit Barcelona in the first place. To visit and pay homage to Ludwig Mies Van der Rohe’s Barcelona Pavilion.

For those of you who do not know, it was the German Pavilion first built in 1928-29 for the International Exposition in Barcelona, Spain it was demolished in 1930 and later on, they figured that that was a bad idea. It was an important building and pivotal in the architects career.  So the foundation set about reconstructing the building on the original site, in 1983 and in 1986 work was completed.  It is now open to the public and can also be hired for private events.

At this news, I thought what a wonderful place to have your wedding photographs taken. I felt that the clean lines, beautiful chrome and glass and exquisite stonework, would only enhance the photographs from the best day of a woman’s life.

We had tried to find it for three of the five days which we had planned for Barcelona and yet, it was not easy to find at all.  We went past the signs for it on the bus, but still couldn’t find it. I had seen photographs of the place, but I didn’t know what surrounded it, something to look out for and three different maps didn’t show us. 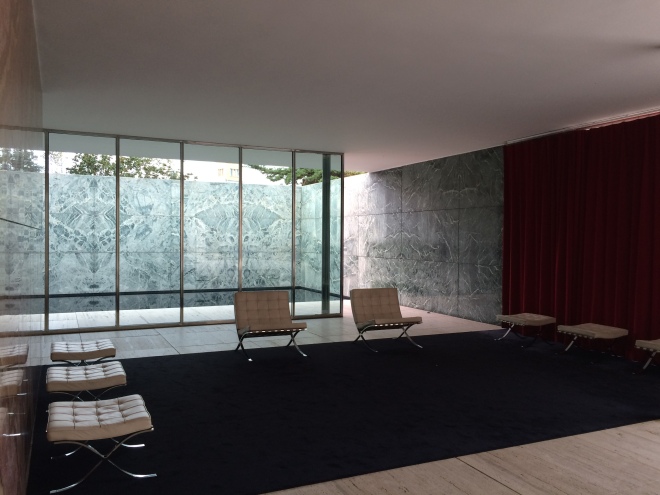 Once we were inside, you could see the iconic Barcelona chairs displayed. I somehow thought that there would be more furniture inside it. My mother was distinctly unimpressed with the whole place and within a short time was clearly bored.  We had taken a while to get there and were both tired. She agreed that the building construction was very good, but that was it for her. 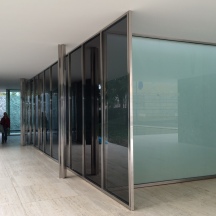 I wanted a little bit more from the experience, I had thought that I would have a little time to relax there for a while and meditate, but my legs were aching from the walking and I could not get comfortable or shut out the sights and sounds around me. For a moment I stood next to the statue within the place.  It was not quiet enough, but would have to do.

2 thoughts on “I knew it…Someday I’d get there”