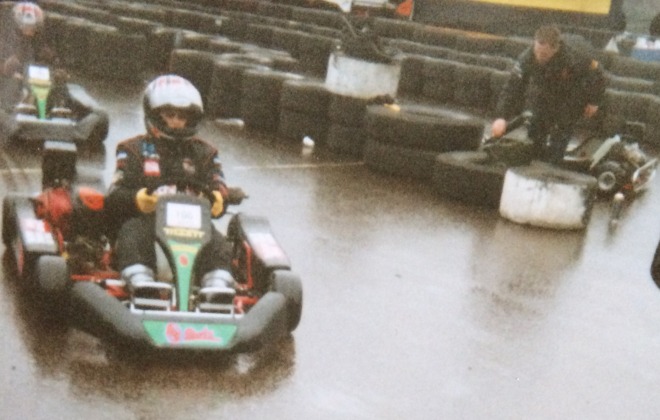 As she chased her dreams of doing something with her life, she would enter a National competition with the chance to become a racing driver. The Exchange and Mart Drivers Challenge and it was run by Tim Matthews who was an experienced racing driver. Never thinking for a moment that she had much more than a slim chance, but seizing the opportunity anyway after all what did she have to lose?

She loved Cars and driving and if she could combine the two in a future career, then that would be fantastic.
More wonderful than that, she had a man who believed in her. It was the most exhilarating feeling to have someone in her life who did, who encouraged her to try something new and was behind her all the way.

She sent off the forms and began work to increase her fitness and stamina. Her strength was there, it just needed some fine tuning and whilst she did this she did not think about the application, she was just concentrating on getting fitter and stronger. So imagine her surprise when some short time later, she received a letter. She was invited to Worcester Rugby Club to take part in the first selection of the competition. She spoke to her boss about it, booking a couple of days leave so that she could prepare and he couldn’t quite believe that she had any aspirations. This was someone he had underestimated greatly and assumed that her position as she had risen through the company was as far as she was going to get.   He was flabbergasted, since his privileged son, who had an amateur career in Go-Karting had only dreamed of such an opportunity, despite his entering it had not been selected for the competition. There was this girl, with no prior experience of racing, who had been selected. She surely wouldn’t get through the first round and it would be all over in a flash, then he could take delight in reminding her that she had failed every day and that she was not good enough. It would soon be over and he would control the situation once again.

They travelled to the location and booked into a hotel the day before, it was a beautiful place with rolling scenery. The morning arrived and they set off to the venue. The place was jammed to the rafters, 1000 people had been chosen to be put through their paces. They were informed that 10,000 people had entered the competition and they were the lucky ones, as the competition progressed the heats would be recorded for a TV programme, if we were going to become racing drivers, then we would have to get used to the limelight. As a shy person, she wasn’t sure how to deal with this, but would do so if the time came.
Meanwhile, as the day progressed, when she was called for each task, she ran, listened, showed her strengths and jumped through proverbial hoops and impressed the judges enough for the selection with her man cheering her on, overjoyed in her achievement she was one of 100 people selected for the next round. As the event finished, she walked past someone who she recognised who had contracted work with her company. He stopped in amazement asking her what she was doing there miles from home. I got through, she said. She mistook his surprise for a new found respect, she had been placed in the second round, but he had not.

The next round, was scheduled, she booked another day off work to enable her to go, and at the weekend they headed off up to Birmingham, The next round of the competition was interviews and Go Karting, it was a competition track. She was excited, but the only time she had been go-karting was down along the pier in the amusement arcades, but she loved it and was hopeful that this experience would teach her. The weather was awful, he drove them through the worst storms and snow she had seen. It was cold wintry and people were standing around for hours awaiting their turn, she had dressed for warmth wearing ski jackets, layers and snow boots, in this freezing climate. It was mostly boys and men there, in a racing environment it was to be expected, but this did not phase her. She was going to give it her all.

They went through the track layout and how you should plan for the twists and turns, around the chicane and towards the finish. She watched intently as some of the other drivers took to the wet track, she noted their mistakes and hoped that when her turn came, she would do better. She listened to the instructions given by the racing driver, Tiff Needell who had become a celebrity as he extolled the virtues of learning the basics. It might be nice to meet him in person and shake him by the hand, she had admired his skill on the tracks over the years.
There was a race simulator set up alongside the track, the queues to have a go were lengthy and she did not want to miss her name being called, it would be there later, should she wish to try it.  Her time came, as she dressed in the race suit for the very first time, she was thrilled and excited to be a part of something big, this could turn into something much bigger if she handled it right.

She put on the helmet and found the smallest pair of gloves she could find, since this was usually a male environment they had not anticipated girls with small hands, they were enormous, she put them over ski gloves for grip and so that they would grip the steering wheel. She made a mental note that if she was going to go anywhere with this route, she would buy herself some gloves which fitted.

She walked out into the paddock with the other drivers, they ridiculed her for her snow boots whilst stamping their feet to keep warm, she didn’t care she had winning on her mind and selected her machine with care. Setting herself up for the ride of her life and drove out hell for leather on that track. She lapped several of the hopefuls and made a good track time and came back in, her Man was there with the camera, to record it for posterity. The helmet off, he could see an ear to ear smile on her face. As the other hopefuls took their turn, she was called off to one side. Mike, A man who was part of the team, had spotted her talents and wanted to talk. They sat in the meeting room with a coffee, even if you do not get through this competition, he said, there are other ways to get into racing, you seem to have a gift out there on that track. Are you competing at the moment? She tried to keep her cool, admitting to him that it was the second occasion she had ever been in a go-kart. He found that hard to believe and spoke about the projects he was involved with and that he could get young people into racing and get help with sponsorship etc, he was animated and gave her some literature to read, he advised her to continue with Karting if at all possible. He introduced her personally to the organiser and they talked about the competition and how it would progress, several rounds through to the final, where someone would be selected for the team, to join the professionals. It really was the chance of a lifetime.

After some time and more standing around they were called in to a room, to face the adjudicators. As names were called, disappointment was in the eyes of the people around her as they were whittled out. They would halve the people who attended the second round, suddenly she heard her name being called, they were pleased to tell her that she had been selected for the third round. The excitement was immense. She looked for her man, to share in the news, he stood beaming he told her she was so proud.

At the end of the day, they travelled back accidents all around them up and down the motorway, breakdowns and the snow piled high, visibility was non-existent. But they were happy and reached home safely. They discussed the next step, this is looking serious, she would have to book more time off work, she wondered how her boss would take that. The next day she called a meeting with him. He was not pleased, he told her that it was time she had to make her choice. If she really wanted to be a racing driver, then good luck to her! The raised voice made it clear he didn’t mean it, as he spat out the words. He would give her no more time off to pursue this fanciful dream, it wasn’t going to go anywhere, she should just concentrate on the work she was being paid to do, get back to doing the proper job she had working for him. All leave was cancelled, they had a business to run.

She went home, more than slightly disillusioned with her work. She wanted to leave there and then, but common sense overtook her desire to run. She spoke with her partner, there were tears of frustration and upset that she would have to put her dreams away. It was her responsibility to make ends meet, she felt that she could not pile extra pressure upon him financially, it wouldn‘t be fair. Times were different then, she hadn’t the first clue about self-promotion and is was long before social media would make it accessible for all.

It was no contest, If she had the finances, she would pursue her dream, with her man at her side, encouraging and supportive. They would have done it, she had made him proud and would do so again. He believed in her. Oh how she wished for a lottery win, or a benefactor at that time. If she could have had the chance to pay the bills, whilst forging ahead, what a career change that would be, he talent had been spotted and she might go far.

It was with great sadness that she contacted the organisers to let them know that due to work commitments, she would be unable to continue with the competition. They were disappointed, she had shown promise, chances like this just do not come along every day and the decision should not be taken lightly. She explained that without a job, she would not be able to finance the rounds and her taking part, they told her that they understood but that she should not give up, she had a talent and she should nurture it. They wished her luck with her future. She watched the TV programme later that year, they selected a man, who had a career ahead of him. Women in Motorsport, was it ever going to happen was it? There was hope.