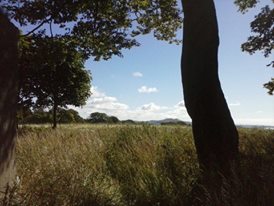 There’s something about days like these, being in a rural location that makes you feel cold to the bone. It’s damp in our house and in a stone cottage where on this trip we have brought with us an oil fired heater which was keeping the chill off, we were feeling rather pleased that it was working.  On a freezing cold night, we are now able to keep warm in two rooms.  I am also extremely grateful that I have the gas cooker in the caravan.  It’s a really old caravan and it leaks and is damp, but it has its’ cosy moments.

Today there is something wrong with the electric. It has been on less than half speed since we awoke there must be a problem up in the fields somewhere. The caravan fused last night, which meant that we had an impromptu candlelit dinner in there.  I was just pleased that there was power left in the house, but today nothing was running right. 20 minutes to boil a kettle and despite the heater being left on all day, the room was still cold and chilly. We wondered if any other homes were suffering but the neighbour is not around so we cannot ask him. So as I prepped dinner tonight, a Thai Chicken Curry to warm us up, suddenly the cavalry arrive here, lights ablaze on their team of vehicles, called by our neighbour who returned home to a cold house. We both have very dim lights.  At first we thought that the bulbs might be on their way out, but since they are the old incandescent ones, they either work or they don’t.

So Scottish Power arrived at about 9pm, to head over the hills to investigate a cabling problem, we were all at half speed so it seemed.

Grateful for the logs, gas bottles and candles I have in the house along with the bottled drinking water and our washing water.  Yes we are basic here, but pretty self sufficient for a night at least. The guys worked through the night, cutting all power to our homes from 11pm. Back on by 7am they let us know before heading back down the hill. We were very relieved that we could get the oil fire back on again to warm it up. 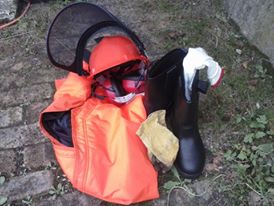 So today we are back to normal again and since I only brought the electric chainsaw with us on this trip, I am relieved as I will have to cut wood again in a couple of days, to actually fit on the fire. Our logs were hastily cut from trees which had fallen in storms in the past couple of years, all sections are about a foot high and anything up to 2 feet across and were not logged at the time.  They have dried in large pieces and now need to be split.  We tried a small hand splitter, a large axe, a small hand axe and we only have the small chainsaw left here to try.  My partner tried it the other day, but his old injuries along with the new ones have been playing him up and have left him sore. So it will finally be my turn to try, I have the kit for working outside, chainsaw helmet, muffs, gloves, trousers and rigger boots.  I am sure that with his guidance I’ll be able to do it.  When I get the hang of using the small one, then I can move onto the big one next time.  But for now this will have to do for us.

Something occurred to me yesterday morning though, if all the big strong men up here get their logs delivered and pose with their axes for their women, then there is probably a reason or two why.  I will leave you to come to your own conclusions there.

Our neighbour has a bandsaw and a huge pile of perfectly sawn logs.  They are outside ready for winter and he has moved them outside his back door for ease of use when needed.  When the power was down, my partner commented that it must be lovely and warm in there with his new log burner going. He was a little bit shocked when he was informed that despite having it fitted over a year ago, that the man still has not yet used it. That “it was a very messy business using this one, and all the instructions are in Italian.”  As my partner says, that was three reasons.  Remembering the other neighbour with his wood delivery my response was My God, is it all for show up here?

How difficult is it to light a fire for goodness sake?

I guess some people are not blessed with either common sense or practicality.

I don’t know why the mess of a log fire should bother him, he is a wealthy man who has people to clean and pick up after him.

So when there was not enough power to pump his oil fired heating around his house rather than put on a coat to come outside and speak to the men from the power company, he stood in the icy cold in his sweater. He did not figure out how to use his log burner and would rather sit indoors moaning that it was cold.

We did have some light it was so dim that it was little more than candlelight and it wouldn’t even power the fan heater, or the electric blanket on the bed. We put on extra layers, extra logs on the fire and can boil a kettle on the gas in the caravan if need be. Although everything took twice the time to achieve it didn’t much matter to us, we were not on a schedule, however for the folk who are, it must have driven them crazy.